The Beauty of Karelia 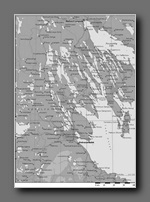 Modern Kondopoga originates from a village with the same name. The very first written reference well-known to historians dates back to 1563.

1757 large deposits of marble were discovered near K. That marble was widely used for building palaces in St Petersburg.

During World War I Main Artillery Administrative Department of Russian Military Ministry started building of a nitric acid plant, which was essential for gunpowder production. A hydroelectric power station was designed to meet a considerable demand in energy. The building of the plant was started near K to exploit the difference in water-levels of Nigozero and Onezhskoe Ozero. Planned power of the plant was 30 MWt, and it was to become the largest in Russia. During the Russian revolution and Civil war the project was stopped and all the equipment taken away.

In 1927 Kondopoga became a regional centre, which was given a status of the town in 1938. At that moment the population of Kondopoga was about 14,000 people.

During World War II Kondopoga was occupied by Finnish troops and totally destroyed. Plants and factories were out of order, houses and blocks of flats were demolished along with concert halls and museums. After the war everything was rebuilt.

In 1957 Kondopoga was declared the all-Union Komsomol building site. After that a number of new plants were built in the town - a stone-working plant, stoneware and mineral plant. Kondopoga pulp and paper mill was also developed.

Nowadays Kondopoga is considered to be one of the most important industrial centres of Republic Karelia. Leading industries include paper production, woodworking industry, stone-working industry and building-material industry. Kondopoga is the administrative centre of the region with the population of 50,000, the population of the town being 38,000. There are 75 settlements in the region.

Kondopoga region (area - 5,900 sq km, population - 47,800 ) is situated in the centre of Southern Karelia. It is washed by the northwest part of Onezhskoe Ozero, second largest lake in Europe. The shores to the north and northwest are high and rocky, built of layered granite and covered with forest. There are three picturesque bays - Kondopozhskaya, Lizhemskaya and Unitskaya. These places are perfect for yachting, rowing boat trips as well as summer and winter fishing. There are numerous lakes and rivers in the region. The biggest river is the Suna, which crosses (flows through) the region from northwest to southeast. The river is sometimes called "The mother of Karelia waterfalls". There are three of them - Por Porog 16.8 metres high, Girvas (14.8 m)and Kivatch (10.7 m).

Russian Onezhskoye, or Onezhskoe, Ozero, second largest lake in Europe, situated in the northwest part of the European portion of Russia, between LakeLadoga and the White Sea. It covers an area of 3,753 square miles (9,720 square km). It is 154 miles (248 km) long; its greatest width is 50 miles (80 km); and its greatest depth is about 380 feet (116 m).

The hollow of the lake was formed by movements of the Earth's crust, but Quaternary glaciers (the Quaternary Period is from 1.6 million years ago to the present) elongated it from northwest to southeast. The shores to the north and northwest are high and rocky,built of layered granite and covered with forest. There are deep bays at Petrozavodsk, Kondopoga, and Povenots. The southern shores are narrow, sandy, and often marshy or flooded. Onega has about 1,650 islands covering a total of approximately 100 square miles (260 square km), mostly in the northern and northwestern bays.

Fifty rivers enter Onega, the largest being the Shuya and Suna in the northwest and the Vodla in the east. In the southeast and east are the Andoma, Vytegra, and Megra rivers. Lake Onega itself empties into the Svir River. The water level reaches its highest point in the summer and its lowest in MarchApril, varying about 24 inches (60 cm) annually. The water circulates in a twisting pattern within the lake because of differences of temperature between the coastal and the open regions. During autumn gales, waves sometimes reach 14or 15 feet (about 4.5 m).

The region has a cold climate. The coastal parts of the lake and the small bays begin to freeze at the end of November, and the deeper central parts in the middle of January, although in some years the central parts do not freeze. Thawing begins at the end of April.

The colour of Onega's water is dark yellowish brown in the open part and grayish brown along the shores. The lake contains more than 40 species of fish, including ryapushka (a small member of the salmon family), smelt, burbot (a freshwater variant of the cod), bream, pike, perch, roach, and salmon. The fish are of considerable economic value.

Lake Onega is connected with the Baltic and White seas by the White SeaBaltic Canal and with the basin of the Volga River by the Volga-Baltic Waterway, which enable it to play an important part in both internal and international transportation. Goods are shipped over this route from Finland, Sweden, Denmark, and Germany to points in the east and north. For protection against storms, a bypass canal has been dug along the south and southeastern shores from the mouth of the Vytegra River to the source of the Svir. The cities of Petrozavodsk, Kondopoga, and Medvezhyegorsk are on Lake Onega.The island of Kizhi houses the internationally known architectural organization of that name.

The area of Karelia is - 180,5 thousand square km (1,06% of the total territory of Russia). Its length from north to south is 660 km, from west to east on the latitude of the town Kem is 424 km. Karelia borders on Finland in the West, on Leningrad district in the South, on Murmansk and Archangelsk district in the East. In the North-West the Republic is washed by the White sea. The northern border line of Karelia coincides with the state border RF and its length is 723 km.

The republic consists of 19 municipal districts, 808 settlements. Each municipal formation is headed by the person elected according to the Law of Republic Karelia About elections of deputies of representative bodies and heads of local self-governments.

The largest part of the territory of Karelia is a hilly plain with evident traces of glacier. The wavy surface of the land keeps the traces of ancient mountains. Karelia is often called "stony lake-forest land", highlighting the leading elements of landscape, beautiful combinations, created by countless lakes and rivers and the land in-between, covered with forest.

More than 49% of the republic area is covered with forest (main species are pine and fur tree), 25% of the territory is watery surface. There are more than 60 thousand lakes and 27 thousand rivers in Karelia. The largest are the Ladoga lake (area is 17,7 thousand square km) and the Onega lake (area is 9,9 thousand square km). The largest rivers are: Vodla (400 km), Vyg, Kovda, Kem, Suna, Shuya. The total length of the river net is about 83 thousand km.

The Republic of Karelia has favorable economic-geographic location, it is situated near central highly industrially developed Russian and Western regions, has a developed water transportation system, and significant natural resources.