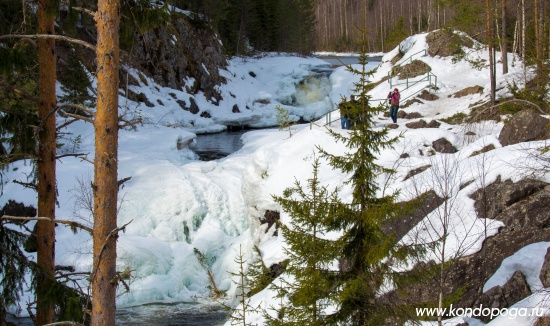 “Mother” of Kivach waterfall is the river Suna. It is one of the largest rivers of Onega Lake basin, with the length of 280 km. It originates from small Kiwi-jarvi Lake on the West Karelian height near to the border with Finland. The river Suna is twisting and full of rapids; it flows in a stony channel, crossing 22 Lakes; there are over 50 thresholds and waterfalls in its channel. The name of the river has ancient Lappish origins and can be translated either as «a beads thread », stringing beads-lakes onto itself or «cutting, ripping up» all on its way.

The appearance of the waterfall is closely connected with the geological history of those places. The stone ridge raised on the way of the river was formed by rocks of volcanic origin which age is about 2 billion years. The steps on which the water stream passes have arisen during later epochs as a result of irregular tectonic motions of earth crust blocks. The waterfall itself appeared 7-8 thousand years ago on a joint of firm magmatic rocks and the friable, washed away by water, sedimentary rocks, after the digression of a glacial lake formed as a result of an armor of last integumentary freezing melting.

Kivach waterfall is the largest of Suna falls, second-large in Europe after Rhine among the flat falls. For three centuries people come there to see this pearl of the North.

The first mention of Kivach is found in the Cadasters of XVI century. However, the real discovery of “the unrestrained athlete of gloomy Korely” goes back to the end of XVIII century and it is closely connected with Gavrila Romanovich Derzhavin's name. This greatest Russian poet became the first governor general of Olonets province and began a detour of his ancestral lands with a trip to Kivach in 1785. The bright impressions of this journey have found their poetic embodiment in the well-known ode “Waterfall” in which Derzhavin extolled and immortalized the great beauty of the waterfall.

The confirmation of the long-lasted history of Kivach is on the rocks, bared from water, around the waterfall. These are the erosive glasses and wells that have been drilled in the firm, but heterogeneous rock by small fragments of stones for many long years of water streams movement and whirlpools; as well as the glacier “autographs99 - the shading which was traced on rocks by the sharp stone fragments hidden on the bottom of its ice body. The scratches are parallel to each other and they show the direction of ice weights movement.

The origin of the waterfall name is connected with different words of Finnish and Karelian languages. That is why there is a set of versions of the word «Kivach» translation:

The mountain is strewed by diamonds From heights four rocks.

To pearls a chasm and silvers Boils below, beats upwards hillocks; From sprays the dark blue hill costs, Far the roar in wood rattles...

About falls!
In your muzzle
All rolls in a chasm, in a haze!
Winds pines strike? -Break in you in pieces;
Thunders stones tear away?
-Are erased by you in sand...

(G.R. Derzhavin)
The first known picture of the waterfall painted from nature, is made by the academician N. Ozeretskovsky the same year. The greatness and the power of this giant amazed imagination. The height of the waterfall is about 11 meters. This is the general distance from the top flat mirror to the bottom of the river. According to the existing data of 1900 the width reached 18 m, the water expense was more than 300m3/sec and approximately 460M3/sec in “the big99 water. Together with numerous lateral streams the falling water represented a huge “horseshoe".

Nowadays the water giant has lost its former power. In 30-50th years oftheXXth century there was the building of the hydroelectric power stations and of the dams providing them with water above the waterfall on a watercourse. This led to a considerable shallowing of Suna on the bottom site.


The height of the modern waterfall almost hasn't changed, but the width doesn ’t exceed 5-6 meters now, and the mid-annual expense of water has decreased almost 14 times. The falling is carried out by four steps. Out of numerous lateral streams only one is left with the height of 7 meters.

Kivach waterfall tamed by the power engineering specialists has lost its former force, but not its greatness and beauty.

Its sound isn 't heard from far away as it used to be, but it is still full of ancient wisdom and bewitching charm of the nature. The falls continue to attract artists and poets, giving them inspiration, to excite the consciousness of numerous tourists, filling their hearts with pleasure and grief.